Launching of floating devices is one of the most critical procedures of the entire construction process. Though often a straightforward procedure, launching may get tricky if sliding friction is not properly considered, or if there is any dimensional restriction along the slipway. In high-slope slipways, a high velocity of the unit could lead to accidents if dynamic effects are not controlled.

The buoy, the largest deepwater buoy in West Africa, could be launched by mechanical means (e.g., using a launching barge or controlled with a set of winches). However, this would entail a high cost that could become recurrent if more buoys are launched in the coming future. The alternative was launching the unit through a slipway. Aveon Offshore manufactured a rocker arm leading to a 10.5-degree slipway for this purpose, but was concerned with the dynamic effects the slope could produce.

The immersion of the unit goes up with the velocity it achieves during the launch, with the inherent risk of hitting the riverbed. The bed was dredged as required before the launching. Dynamic simulations were done to confirm the operation was safe.

The whole launching process was developed, from the yard integration area to the rocker arm, slipway and then finally to the river. A large displacement transient analysis was run in Ansys, modelling the buoy and slipways as rigid bodies. Different friction coefficients were considered, and the hydrodynamic forces from the water were also included. 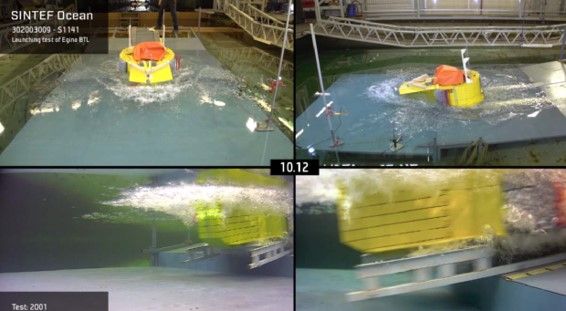 The launching challenge was a success. The simulated runs are compared with the real launching and model tests. The results agree incredibly well.